The situation I grew up in was pretty traditional: men preached, led, made money and were the heads of the household. At the same time, I was surrounded by very good men. There are those. There are men who are both in charge and good. My father, his dad, my uncles, my pastors, my dad’s friends…so many good men. Feminism seemed foreign and suspect–and perhaps unnecessary?– to me as a kid, being raised in this milieu. At the same time, I recognize now that in a non-reactionary sort of way, the ground of my identity was being tilled to be exactly a feminist–one with the notable privilege of having little baggage against specific faces of the presupposed superior gender.

My mom is likely to blame. As mothers are.

While a devout reader of Focus on the Family newsletters at the time, my mom went back to school to pursue a second career in the middle of raising us. Mostly because she wanted to. Having been a teacher (of science no less, the nerve), and then a stay at home mom, she decided to both homeschool and go to school, and gain a bachelors of science in Nursing. I’m sure it was a really easy time for her.

She and my dad then made the move to international missions and relief work a couple years later. We joked when the name space on the display board (for our booth at supporting churches) was taken up mostly by her two-word name, as my dad’s is quite concise: Lee. Oh the hilarity.

My mom is more than the career accomplishments however, and even more that the five of us kids. (She kept adopting and raising kids, far longer than advisable, though we ARE all perfect–a real cake walk.) She is sharp, caring, decisive, emotional, and chatty. She weighed in when she wasn’t invited and, the smart ones among us, learned to invite it. Somehow she’s walked the tightrope between investment and enmeshment. She’s learned how to control her temper and bite her tongue, and I don’t think that there are harder things to master, not that I have those problems. She didn’t yell at anyone at our notoriously gone-sideways wedding, despite it being a somewhat emotionally-charged scenario as their first-child/daughter-who-is-only-21-wedding. She’s great in a crisis.

She is why, when John Cotton Richmond shared in a talk that one of their only family rules is “Keep the ladies happy,” I immediately understood. It wasn’t that the family needed to walk on eggshells; it was that the lady had discernment and wisdom and you’d best pay attention to her input and process for the good of everyone. 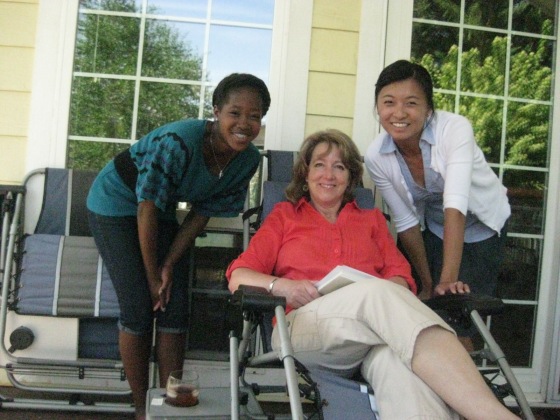 She didn’t tell me and my sister to be feminists; she modeled the strength and autonomy of a full, dynamic person. And by the same token, my dad affirmed her as such. Meanwhile, my sister and I have found out that the insistence on those characteristics held by people with our genitalia is identified as feminism. And so here we are.

My mom is the reason that emotions at first scared me but why I have been free to embrace being a feeling and emotional person without questioning my own credibility. She and my dad have been instrumental in my expectation to continue learning and growing because they did that, they do that, in front of our faces every year. She demonstrated the value of girlfriends and made me work at developing my own girl friendships, discarding competition and comparison, early in life. My mom is the reason I wanted to be a mother, an achiever, a writer, and a consulted voice on most of your personal matters. She and Dad have shown me that marriage includes room for this character. My mom is probably the reason I was fired last year for standing up for the right thing, despite them being Men and Authority and fellow Christians (thanks, Mom!). My mom laid the first stones upon which I stepped as I set out to become an outspoken, intelligent, emotional, transparent and changing woman.

On this international women’s day I am so grateful for the women in my life, who, under various banners, have showed me the power of bringing their own self to the table and linking arms generously and compassionately with others, including good men. I want to empower and support women and their dreams, businesses, families and independence because the women I know are irreplaceable and at the same time vulnerable.

While the list is a mile long of these heroines in my life, it starts with one I get to call my mother. And for this I am so grateful. She deserves all the space on a missionary display board her name can occupy.

The importance of creating and impacting physical symbols to outlast ones own life is immeasurable. From legacy stones with fingerprints, a project initiated by @bekifromtheblock, to writing words on neutral, soothing objects, creating in the midst of pain, separation and dying is a unique liberation for patients, families and caregivers. It helps connect people to another time and grounds the grief in an integrated way. I’m so thankful to work on a team and in a hospital that values and facilitates this. So many rituals have helped me and my friends in times of grief; from broken dreams to sold buildings to ends of an era, observance is key. I bring these offerings to patient rooms knowing full well the power of paint, pens and symbols. I encourage us all to lean in and ritualize and symbolize our sadness just like we do our celebrations. ♥️🕊
Generally people do the best they can with what they know at the time. I try to extend that air to my self. There were reasons, there was goodness, and it may have been totally different if it had happened tomorrow. 🤎🕊
Sometimes we twin and it’s not even always planned. Also, we have a lot of height difference on our team.
Chaplaincy can be holding hands when someone realizes they’re not in control either. “Not Even the Monstera” could be good news and the worst news. We have breath and we are but breath.
God bless the layering of paint and the stripping, the building and the peeling. The abstract misshapen character that emerges between old and new. God bless the sturdy underneath, the same through the storms but changed.
Saturday projects once in a while.